Why Non-Profit Credit Counsellors Should Not Be Offering Debt Settlement.

Why Non-Profit Credit Counsellors Should Not Be Offering Debt Settlement.

In December 2012, I placed a “mystery shopper” call by fluke to a non-profit credit counselling company.  The website is nomoredebts.org.  I was doing some research online on the keyword “debt settlement” and their advertisement on Google caught my attention in my Markham, Ontario  office.  When I clicked the ad it took me here.  I took the following screenshot of the Google advertisement below:

I found it unusual that this particular company was advertising debt settlement services for two reasons 1) the president of the company, Scott Hannah, has been so publicly critical of debt settlement and 2) they are a non-profit credit counsellor. Why all of a sudden are they offering to settle debt?  I’ll be the first to admit that my industry has been polluted by a few bad actors, but there are plenty of really good companies in Canada that are getting excellent results.

The thing that caught my eye was this: “Toronto’s 100% Free Debt Settlement”.

Wow, free eh?  Who doesn’t like that price point?  I proceeded to fill out the form to get my call back and learn more.

Its a good thing our telephone lines here are all recorded because, what came out of the call really blew me away.  Well, it turned out it wasn’t a free service.  The cost went from free to 10%, then 15% of what the settlement payment is.  Talk about deceptive advertising.  Turned out the “free” program wasn’t debt settlement at all, it was their debt management plan where you pay the full amount back with some reduction in interest over 5 years.

Correct me if I am wrong, but I think the name for that technique is “bait and switch.”

Not for profit credit counsellors like to use the word “free” a lot.  This pisses me off because the truth is, nothing in life is truly free.  Non-profit credit counsellors say this because most of their revenue comes from creditors; the remaining revenue comes from the debtor.  Hence, the use of the word: “free”.  But because they are compensated by creditors, they have a board of directors that includes creditors.  So that’s why I argue that it’s the creditors that are in the driver’s seat when it comes to non-profit credit counselling.  You can check out the 2012 annual report from on their website here.  On page 3 near the bottom right, you can see a pie graph where they disclose their source of funding, check it out: 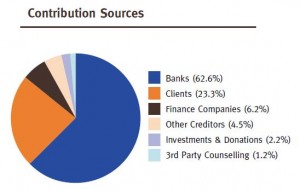 So their job is to get you out out of debt, but they get most of their money from the very people you owe.  Talk about a conflict of interest.

At first that didn’t make any sense, why was I going to settle for nearly twice as much with their company when it was a debt settlement program?   But after some thought, it made sense.  Let’s do the math.  They charge 15% of the settlement amount.  So an 80% settlement of a $1,000 debt would be a fee of $120. If they were working towards a 40% settlement of the same $1,000 debt, the fee would only be $60.  Now I’m not sure if creditors are economically incenting credit counsellors to submit really high settlement offers or not, but clearly something is wrong with how they get paid if they earn more for getting higher settlements to creditors.

So when I understood their fee model was to bill based on the settlement payment, and not the savings, I realized they weren’t motivated to save me much money on what was owed.  When I asked why, he said “to be honest, it’s not our job to save you money”.

Wow, that said it all for me.

At the end of the day, not-for-profit credit counsellors appear to be VERY tight with creditors.  After all most of their compensation comes from creditors, and they have a board of directors that include creditors.  No wonder the settlement of 80% seemed high.

At Total Debt Freedom, we are the opposite.  We are motivated to save you money.  We never accept money from creditors, and 100% of our funding comes from our customer.  We also use metrics like Net Promoter Score, and compensate our staff on happy clients that graduate debt free.

Another interesting option presented by the credit counsellor when I told him his settlement plan seemed difficult to meet was something that he called “the statute of limitations”.  He suggested that if I “do not pay” my creditors for two years that my creditors can’t “legally try and go after you for the debts” after that.  He said that the debts would still exist in the background, but they won’t be able to call me or take me to court.

Now I’m a collection industry insider, and have been in the debt collection business for nearly 20 years, so I know for a fact from experience that a debt may pass the limitation period but it does not go away, and you will still receive collection calls.  In my prior life as a collection manager, countless people would call the collection agency I worked at to pay off really old debts because their bank wouldn’t approve financing on a car or home they wanted.

I’m not sure how anyone looking to resolve their debt would find either option we talked about helpful.  The settlement plan that the not-for-profit credit counsellor talked about is nearly twice as expensive as a for profit debt settlement company, and the other alternative was to just not pay a debt for 2 years and hoping it would disappear? You can contact expert lawyers like Mergl & Wenger, Attorneys at Law who knows the law inside out to clear all your doubts and give you legal counseling.

It also raises another question, why didn’t he refer me to a bankruptcy trustee or to a for profit debt settlement company that could meet my requirements?  Also considering a considerable portion of their funding comes from creditors, it raises the question as to why he would encourage me not to pay my creditors at all.

Now in the interest of transparency, I should state that I am biased because I run a debt settlement company that creates raving fans out of people drowning in debt, so yes, I think my plan works well and is better for a consumer.  But I REALLY don’t think not for profit credit counsellors should be offering a service that is inherently designed to advocate for the consumer to settle for less than whats owed, especially when they they clearly have influence and revenue coming from creditors.

Here are some articles you may find useful:

Why Creditors Want You On Their Plan, And Not Our Plan

What’s Up With Non Profit Credit Counselling, Are They The Good Guys?