I will probably show my age here however here it goes. Years ago a friend of mine bought a 1979 Volkswagen Scirocco. He drove that car like it was the fastest car on earth.

At this time he was living in California so the car was in mint shape. No RUST!! 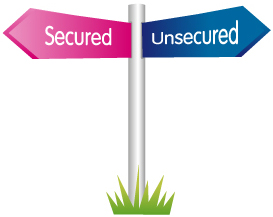 He would write letters to me and brag about how he would race all other cars and kick their butts off the line. I am telling you this is because the car was financed.

Life got a little tough for my friend and eventually he was out of work for a period of time. Although he was making it by and paying all his bills, eventually things got worse. He had to make a choice. Have a place to sleep and things to eat, or keep making the payments for the car.

He decided he could no longer afford the car payments. One morning as he was on his way out for an interview, he went out to his parking spot and guess what? The car was gone. It had been repossessed!

Just like others, my buddy had no idea what the difference was between a secured debt and an unsecured debt.
The simplest way I can put define it is if you were to stop making the payment, could the bank or the person who financed the item for you take it back if you miss payments? If the answer is yes then generally speaking, the item is secured. Unsecured items, no one can take away from you.

Check out my vid, and I will go into a bit more detail.