What is a Consumer Proposal?

What is a Consumer Proposal? 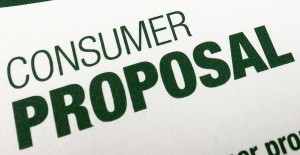 A consumer proposal is administered by a trustee in bankruptcy so there are considerable differences with noteable advantages and disadvantages to debt settlement.

A consumer proposal is essentially a form bankruptcy.  So it offers the same advantages as bankruptcy.  If 51% of your creditors accept the proposal its binding on the others, and collection calls will stop and your creditors can’t sue you.  If you stick to the plan for 5 years, follow all the rules, and make all your payments, you will be discharged and debt free.

If your creditors deny the consumer proposal, you can be forced into bankruptcy. To prevent this, you need both legal and professional help which you can get from https://www.marcbrownpa.com/bankruptcy/

The disadvantages are that most consumer proposals take 5 years to complete, do considerably more damage to your credit rating then other debt releif options, can be more expensive and offer less flexibility.

I would argue a consumer proposal does more damage then just filing bankruptcy due to the time-frame to debt freedom being considerably longer.

If you are a second time bankrupt, the time extends to 14 years.

Regardless of if you choose bankruptcy or a consumer proposal, it is the worst thing you can do to your credit rating.

I have two issues with consumer proposals:

1) Trustees make more money off you, for less work.  I’m not making this up.  It’s by their own admission that they prefer to sell you a consumer proposal over filing for bankruptcy.

It raises the question:  Is there a conflict of interest?

A trustee would argue that their fees are “federally regulated by the government” and it’s all based on income tables.

A trustee is a court appointed agent to the creditors, but it raises the question as to why a trustee would earn more money if the payment to your creditor is higher.  The odd thing is trustees often compare themselves to referees in a hockey game.  They suggest they are impartial.

But how can you be impartial if you earn a 20% commission of every payment that goes to a creditor?

Remember a trustee in bankruptcy and consumer proposal administrators are often Chartered Accountants (“CA”).  The CA that does my taxes is a total “bean counter”, meaning he pays very close attention to the numbers.

He is really good at working and massaging the numbers to maximize my returns.  Keep that in mind when considering a trustee.  Based on my experience with accountants, I’d expect a trustee will “bean count” everything to squeeze out a larger payment to creditors.  After all, they earn 20% of every consumer proposal payment made so it would only make sense.

Total Debt Freedom is different because we do not earn more money if the settlement payment to the creditor is higher. In fact, our debt negotiators get compensated based on saving you more money, and getting you graduated to debt freedom.

I recently did a radio interview with Gail Vaz-Oxlade on my new DIY debt settlement book and took an excerpt from our conversation.  I found her comments interesting when we touched on the subject of bankruptcy versus a consumer proposal.

A consumer proposal is often sold as the “right thing” to do or more “ethical” then bankruptcy.

At the end of the day you need to figure out for yourself what is right for you and your priorities.  Weigh out 1) time frame to debt freedom 2) total cost and 3) damage to credit when talking to anyone about debt relief, and gather all the facts.  Ask about all your options including debt settlement.

I encourage you to rely on the BBB when selecting a trustee, or any other service provider.  Look for one that is “accredited” and has a “A+” rating.

On a final note, a trustees fees are government regulated so they should all charge the same.  It wouldn’t hurt to check out 3 different trustees and see what they each tell you or you can contact our office and learn if you can learn what a consumer proposal is or if its right for you..

Most inquires we get aren’t the right fit, so if our program isnt right, we’ll happily refer you to the proper solution for your debt troubles, and we’ll do it for free.  Contact us now to learn your options, and get a free quote by calling (866) 833 – 1992.