When You Should Give Zero Fucks About Debt

When You Should Give Zero Fucks About Debt

Parenteral Discretion is Advised.   If the truth infused with playful profanity offends you, do not read on, this article contains both in abundance.

I’m an entrepreneur, and I’ve been in the credit card debt game for a long time.  I’ve been a collection industry insider and manager. I’ve also helped thousands of Canadians get back on their financial feet through my company by reducing debt by up to 70%.  It’s been over 21 years now and if there is one thing I’ve learned, it’s that there is an appropriate time and place when you should give absolutely zero fucks on a matter that troubling you and debt is no exception.

The problem with debt is most people don’t know when they should give zero fucks about their debt.

People will give zero fucks about a job, relationship, what people think, but for some reason we as a society think we should always bow down to the big credit card companies.

The pressure of a “credit rating” is immense.

A significant problem is most people with debt, just aren’t self aware of their credit, and how useless it really is to anyone.  The ultimate test is this.  If you posted an ad in the classifieds that read “I have $31,000 of debt on four credit cards, and a credit rating.  Open to offers, will consider trades”  How many people do you think would buy that?

The answer is ZERO.

Canadians are drowning in more debt than ever, our debt to service ration is over 163%, and climbing.  What that means is for every dollar of disposable income, we owe $1.63; chances are you are, or know someone in your life that should consider giving fewer fucks about debt.

From my experience, there are too many people that care too much about what credit card companies think; far too many fucks are given in this area when people should be focusing their energy on fixing themselves instead of being concerned about servicing crazy amounts of debt.

I can say from experience with thousands of clients, and with full confidence that it’s only those people that have mastered the art of giving zero fucks to what creditors think, that have been able to move past financial hardship, to get totally debt free and rebuild their life.

It’s those zero fucks given, that make the difference between those that live a miserable lifetime drowning in debt, from those that fix their financial well-being and move forward. 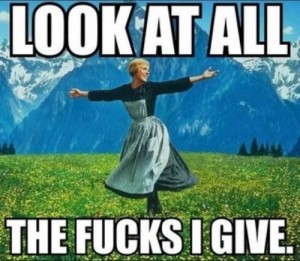 To be clear, I’m not suggesting everyone should just stop paying their bills and give zero fucks about debt.  I think that if we borrow money we should pay it back, but only IF we the have the capacity to do so within 3-5 years, anything else is meaningless and a waste of our efforts, time and money.

It boils down to this test:  If your income isn’t paying down the debt, I’d suggest it’s time to start giving zero fucks about what your creditors think, start choosing yourself and starting fixing your own life first.

It may seem hard to not give a fuck about your debt, so let me give you two reasons why you might want to consider giving zero fucks about debt.

I’ve heard people plea to credit card companies, but their response always seems cold, frigid and boils down to the money.

The credit scoring system is judgemental, and ruthless.  Everyone should try to work themselves into a position where their credit score is irrelevant.

You are a very tiny part of a huge amount of people that make up a profit margin.  You are either making creditors money by paying interest or you are not.  It’s not personal, it’s just business.

There is no special rule book creditors use to cut you some slack if something bad happens to you in your life.  Your story doesn’t matter.  If you are struggling in life to live, you need to figure it out.

The golden rule makes a very loud, and profound economic point:  “whoever has the gold makes the rules” and it’s your creditors that are the gatekeepers of the gold.

If you don’t follow their rules, you end up going through the collection agency cycle.   Calls, and letters are all tools they may use.

At some point, creditors sell debt for pennies on the dollar to a debt buyer or hedge fund.  That means a $20,000 credit card balance you owed could be sold off for as little as $0.02 on the dollar, or $400.

Creditors know that a certain percentage of their collection portfolio will never pay.  That’s why they charge it off their books, and send it to collection agencies.

Reason #2:  The government doesn’t give a fuck.

The government will not bail you out.  You are not General Motors, too big to fail or require “economic stimulus” and you can fail financially.   They are not going to give you a consolidation loan.  You are just one vote, if you show up at the polls at all.

For example.  The Ontario Liberal government passed a bill in parliament called Bill 55 in 2014 which included some significant changes to the way debt settlement companies can save you money.   It illustrates exactly how little fucks the government seems to give about you as a consumer.

How do I know this?  I spent well over a year talking to the government policy makers on this bill.

Credit card companies and their interest groups had no right yielding so much power and influence.  But they did.  These were all interest groups that wanted to preserve their profit margins, and make it hard for people to use other avenues, like debt settlement, to reduce debt and get free faster.

Non profit credit counsellors, and credit card companies have a conflict of interest and can only advocate for themselves or the creditors.   They do not represent you, save you any principal owed or aim to get you debt free in less than 5 years.

When called upon by the government for consultations, I provided fair suggestions to protect the consumer.  One of the stronger rules we asked for was giving power to debt settlement companies to stop harassing collection calls.   It was reasonable, since credit card companies would relentlessly pound clients with collection calls unnecessarily.

Instead the Liberals ignored that very important proposed change we brought forward to protect Canadians, and only seemed to listen to those interest groups advocating for the credit card companies.

CCS has been criticized for years, for being a kinder, friendlier collection agency for credit card companies.   Credit card companies will discourage you from using a bankruptcy trustee or debt settlement because they want you on “their” plan.  The CCS plan where you pay considerably more money, over a longer period of time, in a program that is effectively viewed the same as a bankruptcy by credit grantors.

It seemed clear to me that zero fucks were given to what was good for the consumer after I went through this process.

I shared some thoughts on the process in this video below.

You only have so many fucks to give in life, and you should give them sparingly and only when it matters.  We shouldn’t feel a moral obligation to credit card companies when you’ve already paid more than your share, and can’t afford to keep doing it.

Keeping a proper roof over your families head and nutritious food in your bellies (AKA Self Care) should trump credit card companies’ demands for money.  Every.  Single.  Time.

On one hand, we as consumers sometimes use credit poorly; we may make bad choices, and don’t have an emergency fund for a rainy day when life goes sideways.  Sometimes we just act irresponsibly with credit and think:  “well they gave it to me, why would they give me that much credit if I couldn’t pay it off”.  You’ve got to take ownership, BUT it shouldn’t mean a lifetime of interest only payments.

On the other hand, creditors have also been widely criticized for giving people way more credit than they should and not being very transparent when it comes to disclosing the true cost of credit card debt and how to pay it off quicker.

If what you are doing isn’t paying your debt down, it’s time to consider giving zero fucks about your creditors, and start caring about yourself, and your family.

You are probably wondering what to do or where to start.  First of all, fix yourself.  I don’t care if it’s your health, your job, or your mental state.  Whatever it was that derailed your finances, fix that.  Work on that first.

A dirty secret that credit card companies don’t tell people is there are tens of millions of people in Canada  not paying their debt.  They won’t go out of business.  They know what they are doing.

Fucks should only ever be given, and reserved for truly fuckworthy things.  Family.  Friends and your own self care.

Once you are on solid ground, then you can look at debt relief options.

If you have plenty of debt and very little in the way of assets or none at all, I’d suggest talking to a trustee about bankruptcy, since after all, you’d have nothing to lose.    Google “bankruptcy trustee” and ask them how they can help.  They all do the same thing, and follow the same rules.

Otherwise, if a more flexible debt negotiation approach is of interest, talk to us and learn how it works.  It’s still a viable option, and  we might be useful to you, and if we aren’t the right fit, we will send you in the right direction for free.

Join me in raising your middle finger in the air, and if you’ve read this far, and got value from this article, please share it with your friends on social media channels, and spread the word.  It may be time for them to give zero fucks about debt too.