Steve Jobs Leaves a Dent In The Universe

Steve Jobs Leaves a Dent In The Universe 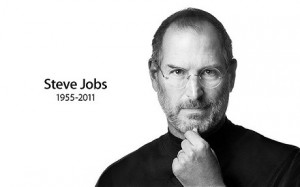 I never bought an Apple product, in fact I think some of the people that are fanatical about Apple in general are just plain nuts.  He was however an epic visionary, and leader.  He was criticized as a  control freak and even called a megalomaniac.

I believe he liked that.

I respected and looked up to him as an entrepreneur.  Reflecting back, I’ve always somehow been drawn to Steve as an innovator and leader as a moth is to a porch light.  He thought differently and challenged the status quo.

I think unintentionally I’ve done the same with my company, people always told me that I’m nuts (and still do), that debt settlement won’t work, you can’t build a business on it, creditors wont work with you, and so on.  Well the truth is I’ve proven them all wrong, and without people like Steve Jobs demonstrating on such a massive scale that shackles are for wimps, we would all live in a more boring world.

Here’s to you Steve.  You left a dent in my universe.  I’ll miss you.

“We’re here to put a dent in the universe. Otherwise why else even be here?”  Steve Jobs

Steve jobsSteve Jobs Leaves a Dent In The Universe